The pension was named after the chapel of Our Lady of Klattau, which is located directly opposite the pension and which all locals call GRANTL according to the old German name. The chapel does not stand here by accident. It is a place with a rich cultural and social history.

An old legend says that once a widow with her children lived in Klattau. However, the widow soon died and her eldest son started wandering to gain a life experience. He took nothing with him but the old Marian painting that his mother always held in high esteem. He hid it in his rucksack and wandered to Kasperske Hory with good mind. As he climbed from Häselmühle (now completely defunct mill at the Golden Stream) up to the town, he had to rest a little and settled on the place where the Grantl Chapel stands today. As soon as he wanted to move on again, he suddenly couldn't lift his bag with the painting. Then he asked a passerby woman to look after his luggage and he ran to the Dean to ask him for advice. He told him that the Mother of God apparently wanted to stay here and he had to keep the painting here. With a heavy heart, the boy said goodbye to his dear memory of his mother, but he remained in the city until the torment was erected at the place of the miracle. There was the painting, previously so heavy, lightly hung. After some time, one of the grooms carried the flour into the city. As he came to the torment of the gods, the horses did not want to go any further with fatigue. The groom whipped his whip at the painting, believing it to blame. Immediately, large drops of blood spurted from the head of the Mother of God, whose traces are still visible today. Like a madman he fled from here and killed himself. Human crowds were flowing far and wide to see a miracle. Every year big pilgrimages were held to the place around August 5 and a chapel could soon be built from the offspring. The number of worshipers of the miraculous painting grew, and finally a magnificent pilgrimage church grew above the chapel, where the picture was to be transferred from the chapel - but it always returned to its original location. However, it was not known what name to give to the new church. It happened that in the middle of summer, and just in the anniversary of the miracle of blood on the church snowed until its roof was white, and since then has been called the Church of Virgin Mary of the Snow. That is why every beginning of August, there is in Kasperske Hory a celebration of the Virgin Mary of the Snow, to which processions come from far and wide. (Source Böhmerwäldler Jahrbuch 2014 WILLI JUNG)

The pension itself is a building from 1912, which was built by the then mayor Dominik Neumann originally as a low-floor woodworking workshop. Nevertheless, individual floors were added, and the mayor lived in the house with his family. The house burnt down in 1933, leaving virtually only a brick core. All wooden elements therefore had to be restored and have since been preserved in their authentic form to this day. 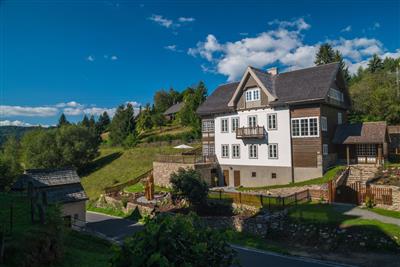 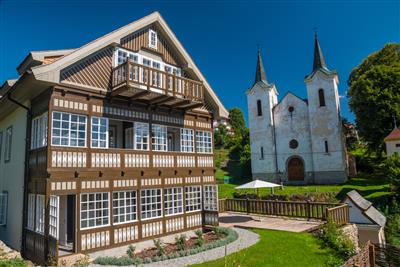 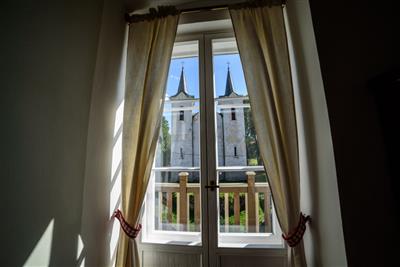